10 Famous Temples in South India for a Spiritual Journey

There are many famous temples in south India, known for its beautiful architecture and mysterious histories. Some are even known to possess treasures of the forgotten past. This is the area where one can find a lot of architectural excellence when it comes to temples.

They have breath-taking beauty, and they also are the place where people visit to restore their faith. In India, most people believe in God. Hindus have different deities and gods to worship, and they visit these places with faith and with a belief that this will bring some positive changes in their lives. The southern part of India gets a lot of visitors during

It is said if one takes a study of the entire southern part of the country, there are more than 33 thousand temples that can be traced. As for the tourists, south India tour is filled with the mesmerizing temples and their significance.

But only a few of them are famous worldwide and a huge number of people gather there to offer prayers. Also, most of the temples have been labeled as the World Heritage Sites under the UNESCO as they bear the masterpieces and artworks of history. Among the most famous is the golden temple of south India, known to towered in pure gold is a real architectural masterpiece.

The most famous temples in south India are the center of many folklores and legends that have emerged from the stories that locals tell. For example, the Airavatesvara temple in Andhra Pradesh is known to have some musical stairs. The temple, devoted to Lord Shiva, the temple was built by Rajaraja Chola II and is known to consist of different tapping sounds in each stair, denoting the seven swords of the Indian music.

10 Famous Temples in South India for a Spiritual Journey:

This is a famous temple where Lord Ranganatha is worshipped. He is the reclining form of another Hindu deity called Lord Vishnu. This temple complex is big and covers an area of 156 acres.

The temple has a pure Dravidian form of architecture and is very much unique which makes it one of the most unique and famous temples in south India. It has seven rectangular enclosures made from concretes, and they round a chamber where the idol is situated.

This is another popular pilgrimage site in Tamil Nadu, and this temple is dedicated to Lord Shiva. Located in Chidambaram, this temple sees a lot of visitors throughout the year as they are the devotees of Lord Shiva. The south India tour mostly comprises of temples of Shiva and Vishnu, hence it becomes a great Pilgrimage site during the Hindu holy times of the year.

Here, in this temple, Lord Shiva is named as ThillaiKoothan and the idol is of a cosmic dancer. Here, Lord Shiva represents the element of the sky (one of the five PanchaBhootha) in this temple. It is the second in the most famous temples besides the golden temple in south India.

This temple is famous for the longest pillars, which were constructed to build this temple. At the end of the pillars, there are painted ceilings, and this temple has a hall which is the longest one in India. This temple is located very near to the sea and all the pilgrims come here to take a holy dip in the sea followed by offering prayers in the temple.

The area of the temple is very large and is one of the eminent epitomes of the Vijayanagara Dynasty. Many south India tour is based in Rameshwaram where people go to dump the ashes of the dead relatives in the holy water.

This is another temple dedicated to Lord Shiva and another one of the PanchaBhoothasthalams. Here the deity is worshipped as the symbol of fire or the Agni Lingam. The basic temple structure was built long back in the 9th century when Cholas used to rule the dynasty and later some extensions were made when Vijayanagar rulers came to power. Many archeologists made the south India tour to document more facts about the Vijayanagara Dynasty.

Here one can see the idol of Parvati with Lord Shiva. This temple has four gateways, which are called Gopurams, and the Eastern Tower with 11 stories and a height of 66 meters is considered to be the tallest temple tower of India and it is also one of the famous temples in south India.

This is the third one among the five PanchaBhoothasthalams in South India and here Lord Shiva represents the element of earth. The most attractive part of this temple is the entrance gate, which is 59 meters high.

There is a hall in this temple that stands with thousand pillars, and it was built by the Vijayanagar rulers. Phalguni Festival takes place in this temple for 13 days where the wedding ceremony of Lord Shiva with goddess Parvati is observed. This becomes one of the top festivals in south India which is taken in one of these famous temples in south India.

This is a very old city in this state as years back during the 11th century Raja Raja Chola I of the Chola dynasty built this city. Here in this place, the Cholas also built more than 70 temples among which the most extravagant one if the Brihadeswara Temple which is now one of the prominent places to visit during the south India tour.

This is a World Heritage Site labeled by the UNESCO because; this temple was constructed almost 1000 years ago. The temple is dedicated to Lord Shiva and the architecture displays the Chola’s aesthetic sense along with a dome, which has a height of 60 meters. The ceiling of this temple has frescoes which are unique from the Chola kingdom.

It also gains the largest visitors every year, besides the golden temple in south India. 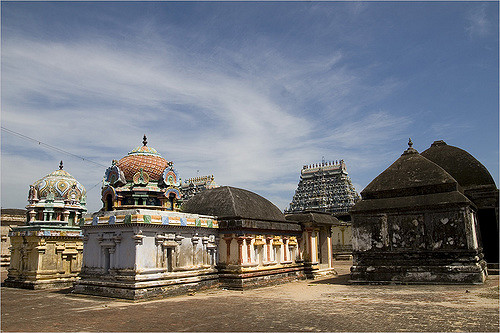 Here the major attraction is the Thyagaraja car festival, which happens here every 12 years. This festival is organized in the month of April. People from all over India make the south India tour to witness this festival.

Madurai is one of the oldest cities in the state of Tamil Nadu. It is in this city lies the world famous Meenakshi Temple, which is a grand one. The temple stands strong on a huge area of 15 acres which has 4500 pillars along with 12 huge towers. This is a grand construction which leaves one spellbound when they look at it. Every year, in the month of April, there is a festival organized here which is known as the Chithirai Festival.

This festival goes on for 12 days in which the marriage between Gods and Goddesses take place. This temple has 14 gopurams and almost 33,000 sculptures. Also, one can get to see a lot of pavilions in this temple and this is why it is one of the most famous temples in south India.

This temple is a new one as compared to others mentioned above as this was inaugurated in the year 2007. The temple complex is about 100 acres, and it is entirely covered with gold. The temple architecture tells us different instances and stories from the Vedas. Also, the shape of the temple resembles a star.

Veerbhadra is the destroyer incarnation of Lord Shiva. Veerbhadra has shown to possess power for bringing apocalypse upon the world when the time comes, hence people from ancient time have worshipped this incarnation of Lord Shiva with all their devotion. It is not only one of the most famous temples in south India, but the most curious one as well.

If you visit the temple, you will be able to see a hanging pillar, which is standing miraculously without any support from the lower side. Many scientists and architects have tried but failed to give a proper explanation. Devotees believe that it is the miracle done by Lord Shiva, the resider of the Veerbhadra temple.

The path that leads to the entrance of the temple is engraved with different messages from renowned spiritual leaders. There are many other major temples that one can visit here in South India like Brihadeshwara Temple and Tirupati. Visiting a temple does not only mean to worship the deities but also to appreciate the architectural excellence.

Juliana is the woman behind The Casino Magazine, a blog solely focused on the casino and betting guides, tips, and advice. She loves sharing her own experiences with other people about Love, Life, Dating & Relationships at The Dating Dairy.

Why Thailand Is an Ideal Travel Destination in 2023

The Best National Parks In Tennessee To Visit In 2023

How To Find Cheap Airline Tickets for your Next Vacation